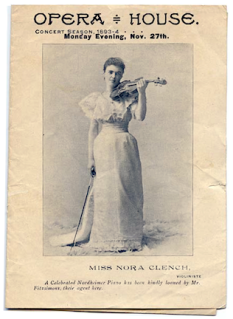 Leonora Clench in what is now Ontario, Canada. Nora made her debut as a violinist at the age of 8. When she was fifteen she entered the Leipzig Conservatory in Germany, and after graduating in 1889 she became first violinist and leader of an orchestra in Buffalo, New York. She later toured Europe and eventually moved to London. • In 1900 Clench temporarily gave

up playing the violin in order to go to Paris to paint. When she returned to music she founded the all-female “Nora Clench Quartet”, which played a prominent role in the music of fin de siecle London. • Clench again retired from the violin in 1908, at the age of 41, when she married the

Australian landscape painter Arthur Streeton. The Nora Clench Quartet continued without her. In 1923, the Streeton family moved to Australia. In 1937 Streeton was given a knighthood for his services to fine art, and Clench became Lady 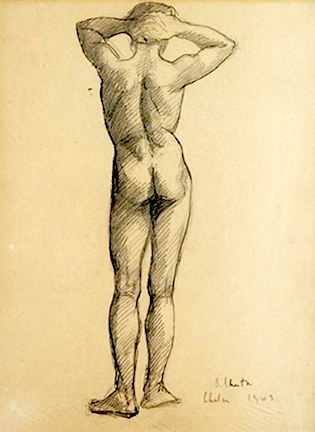 Streeton. • Nora Clench died in Australia in 1938; her husband died in September 1943 after a long illness. The couple’s property with its house, studio and cottage, in 5 acres of garden, remains in the ownership of the Streeton family today.