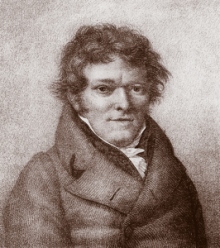 Alois Senefelder (1771-1834) was an Austrian actor and playwright who invented the printing technique of lithography in 1798. Born Aloys Johann Nepomuk Franz Senefelder in Prague where his actor father was appearing on stage. He was educated in Munich and won a scholarship to study law at Ingolstadt. The death of his father in 1791 forced him to leave his studies to support his mother and eight siblings, and he became an actor and wrote a successful play Connoisseur of Girls.
Problems with the printing of his play Mathilde von Altenstein caused him to fall into debt, and unable to afford to publish a new play he had written, Senefelder experimented with a novel etching technique using a greasy, acid resistant ink as a resist on a smooth fine-grained stone of Solnhofen limestone. He then discovered that this could be extended to allow printing from the flat surface of the stone alone, the first planographic process in printing. He joined with the André family of music publishers and gradually brought his technique into a workable form, perfecting both the chemical processes and the special form of printing press required for using the stones. He called it “stone printing” or “chemical printing”, but the French name “lithography” became more widely adopted.
FROM http://www.radio.cz/en/static/inventors/senefelder 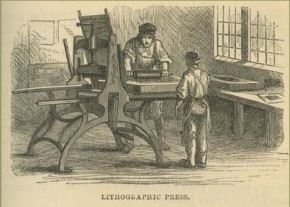 Lithography is a printing technique that gives multiple reproductions of an image drawn with ink or crayon on a certain type of limestone. The image must be prepared with a chemical process so that the grease contained in the ink or crayon (both being specially made for lithographic work) becomes permanently fixed to the stone. When the naturally absorbant stone is wetted before printing the lithographic ink will be retained in all areas containing grease and repelled in all other areas. The characteristic of this printing technique lies in the fact that the image area and the non-image area react differently to the presence of ink.
FROM http://www.polymetaal.nl/beguin/mapl/lithography/lithodefinition.htm 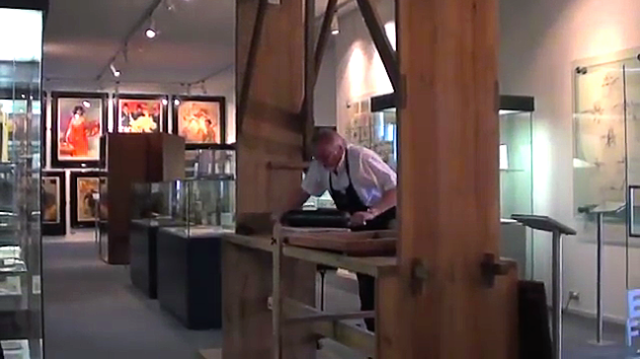 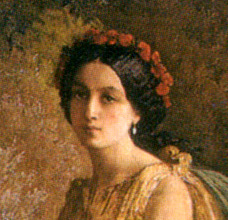