American architect Raymond Mathewson Hood was born March 29, 1881 in Pawtucket, Rhode Island. He attended Brown University, transferring to and graduating from the MIT School of Architecture. He later continued his education at the École des Beaux-Arts, 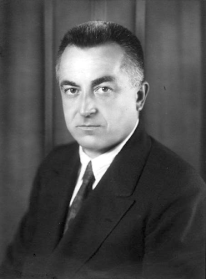 earning a degree in 1911. Hood has been associated with the architectural styles of Neo-Gothic, Art Deco, Streamlined Moderne, and International.

Hood made his name in 1922 when he and John Mead Howells (whom he had met while in Paris) won a competition to design the Chicago Tribune Tower (completed 1925).

Hood promoted visionary proposals for Manhattan, including his “City under a Single Roof” (1931) and “Manhattan 1950” (1931) Hood championed the tower as the ideal form for the skyscraper; he imagined slender shafts soaring above expansive open spaces: a “modern city of sunlight, air, and free circulation.”