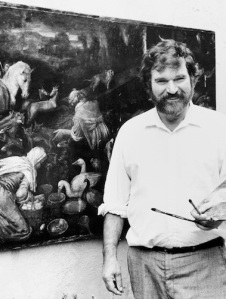 The number of works by Eric Hebborn in public collections will never be certain. Between the early 1960s and his death in 1996, Hebborn created an estimated 1,000 drawings in the manner of various Old Masters, artfully mixed in with thousands more of legitimate origin that he handled as a dealer. Though dozens of the fakes have been detected by curators, and more were revealed by Hebborn himself in his notoriously mischievous 1991 autobiography, Drawn to Trouble, the vast majority remain in circulation under names other than his own.
The sheer variety of known Hebborn fakes has further complicated the task of finding his undisclosed forgeries. He drew convincingly as Andrea Mantegna and Nicolas Poussin, Giovanni Battista Piranesi and Peter Paul Rubens, Thomas Gainsborough and Jean-Baptiste-Camille Corot. He could even limn the 20th century, illicitly expanding the oeuvres of Augustus John and David Hockney.
http://www.artandantiquesmag.com/2011/07/forging-a-career/