The full-color illustration adapted for the image depicted on the Caldecott Medal, from The Diverting History of John Gilpin (1878). Source: http://www.publishersweekly.com/images/data/ARTICLE_PHOTO/photo/000/017/17815-1.JPG

Randolph Caldecott was born in Chester on 22 March 1846. He was the third son of John Caldecott and his first wife Mary Dinah Brookes, and one of 13 siblings or half-siblings. Caldecott attended King Henry VIII School, Chester, where he became head boy.

From an early age Caldecott showed artistic talent. He won a prize for drawing while at school in Chester, and in 1861, when he was 15 years old, the Illustrated London News published his drawing and written account of a major fire at a railway hotel in Chester.

Caldecott was also interested in sculpture, and studied for a time with the French sculptor Jules Dalou. He also produced decorative murals, panels and bas-reliefs, and painted in oils.

Caldecott is most famous for his 16 picture books, published annually in pairs by George Routledge & Sons, London.
https://www.natwestgroup.com/heritage/people/randolph-caldecott.html

The Randolph Caldecott Medal
Frederic G. Melcher suggested in 1937 the establishment of a…medal is to be given to the artist who had created the most distinguished picture book of the year and named in honor of the nineteenth-century English illustrator Randolph J. Caldecott.
The Caldecott Medal “shall be awarded to the artist of the most distinguished American Picture Book for Children published in the United States during the preceding year.”
http://www.ala.org/alsc/awardsgrants/bookmedia/caldecottmedal/aboutcaldecott/aboutcaldecott

An excerpt from ‘Randolph Caldecott: The Man Who Could Not Stop Drawing’
http://www.publishersweekly.com/pw/by-topic/childrens/childrens-book-news/article/58869-randolph-caldecott-the-man-who-could-not-stop-drawing-a-pw-excerpt.html 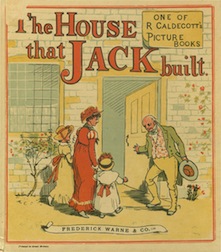