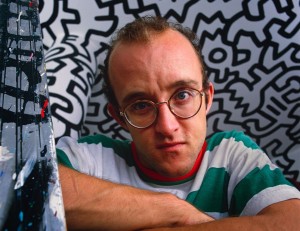 Renowned street artist Keith Haring…was born on May 4, 1958, in Pennsylvania, and died in New York in 1990. His eponymous foundation was established a year before his death, and provides grants to those affected by AIDS.
https://news.artnet.com/people/keith-haring-birthday-2016-485381

Keith Haring was born and grew up in Reading, Pennsylvania with his parents and three younger sisters. His father, Allen Haring, was a cartoonist who may have been an inspiration for him to pursue his artistic talents and certainly influenced his son’s work. Haring entered the Ivy School of Professional Art in Pittsburg at age 17 and studied there for two years. He then tired of the commercial art genre and went on to study fine arts in New York City. Here at the School of Visual Arts he was inspired by graffiti art for the first time…http://www.stencilrevolution.com/profiles/keith-haring/

When not torn or cut from their locations by admirers, they would eventually be covered with new ads. The routine disappearance of these works, in fact, became an incentive for their replenishment and a catalyst for constant reinvention. While many were documented by photographer Tseng Kwong Chi…most of the drawings went unrecorded, thus creating one of the most epic and ephemeral projects in the history of the city.
http://publicdelivery.org/keith-harings-subway-drawings/

By the mid-1980’s, Mr. Haring was also doing oil and acrylic paintings, as

well as wall sculptures and free-standing constructions. He had 42 one-man exhibitions, and was represented in group shows like the 1983 Sao Paulo Bienal, the 1984 Venice Biennale and exhibitions at the Hirshhorn Museum in Washington and the San Francisco Museum of Modern Art. His works are also in the permanent collections of museums like the Stedelijk in Amsterdam, the Whitney in New York and the Beaubourg at the Pompidou Center in Paris.
http://www.nytimes.com/1990/02/17/obituaries/keith-haring-artist-dies-at-31-career-began-in-subway-graffiti.html