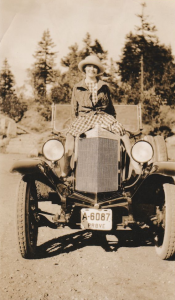 Rita Kernn-Larsen as a young woman. From her daughter Danielle Grünberg‘s collection.

Danish painter Rita Kernn-Larsen was born on January 1, 1904. She attended the State School of Crafts and Art Industry in Oslo, Norway, in her early twenties, returning to Copenhagen in 1926. Kernn-Larsen began training at the Royal Danish Academy of Fine Arts in 1927, but after two years traveled to Paris where she was admitted to Fernand Léger’s l’Académie Moderne. She studied with Léger until 1933, during which time she met her future husband Isaac Grünberg (they married in 1940 and had a daughter, Danielle Rose, in 1944). 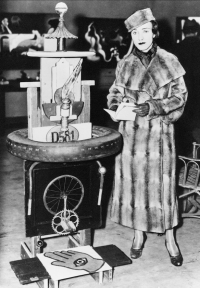 In 1934, Kernn-Larsen again returned to Denmark where she opened her own studio, had her first solo exhibition in a gallery, and met the Danish Surrealist group. Her work evolved from post-cubism to surrealism and by the time she settled in Paris and met Peggy Guggenheim she had exhibited with the Surrealists several times. In 1938, Guggenheim gave Kernn-Larsen a solo exhibition at Guggenheim’s Guggenheim Jeune in London. World War II began while Kernn-Larsen was in London and she remained there for the duration of the war, after which she moved to southern France moved with her husband and daughter. Her paintings began to portray a stylized naturalism reflecting her surroundings in France.

Rita Kernn-Larsen in Copenhagen, 1934. From her daughter Danielle Grünberg’s collection.

During her long career, Kernn-Larsen also illustrated for magazines, experimented with pottery, ceramics and collage, and published a children’s book. Kernn-Larsen died on April 10, 1998, in Copenhagen, Denmark.

Unless otherwise noted, paintings are from the collection of SMK – Statens Museum for Kunst in Copenhagen, Danmark