Katsushika Hokusai (c.October 31, 1760-May 10, 1849) was a Japanese artist, ukiyo-e painter, and printmaker during the Edo period. Born to an artisan family in present-day Tokyo, he began painting at a young age, and became apprenticed to a wood-carver as a teenager. At the age of 18, he was accepted into the studio of Katsukawa Shunsho, an artist of the ukiyo-e style, which was focused on the depiction of the booming merchant class, including courtesans, Kabuki actors, and sumo wrestlers. After Shunsho’s death, Hokusai began experimenting with other styles of art, including Western styles. But he didn’t fully develop his own signature technique until he was expelled from the Katsukawa School.

Hokusai is best known for the woodblock print series Thirty-Six Views of Mount Fuji which includes the internationally iconic print The Great Wave off Kanagawa.

Hokusai created the monumental Thirty-Six Views of Mount Fuji both as a response to a domestic travel boom in Japan and as part of a personal obsession with Mount Fuji. It was this series, specifically The Great Wave off Kanagawa and Fine Wind, Clear Morning, that secured his fame both in Japan and overseas. While Hokusai’s work prior to this series is certainly important, it was not until this series that he gained broad recognition. 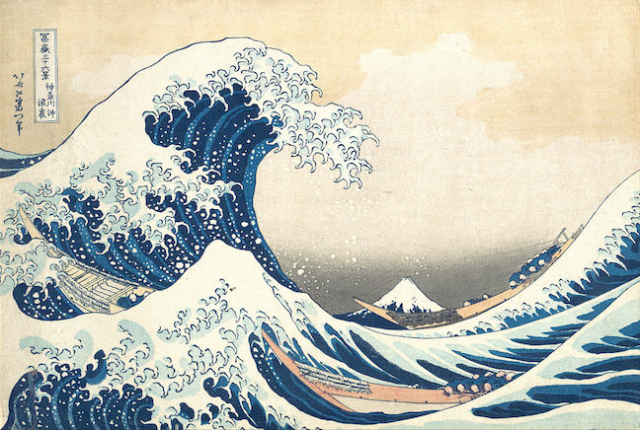